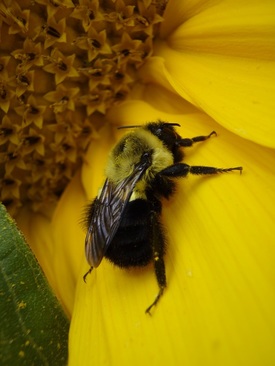 When bees collect nectar and pollen from flowers, they consume plant secondary metabolites, chemicals often associated with plant defense against herbivores. Like other consumers, bees can suffer negative consequences when they ingest these potentially toxic plant chemicals. But could they also benefit?

In dissertation research with Dr. Rebecca Irwin at Dartmouth College, I found that bee parasite infections could be reduced by a diverse suite of naturally occurring nectar chemicals, among them alkaloids, iridoid glycosides and terpenoids. I showed that when bees become parasitized, they may change their foraging behavior in ways that maximize their consumption of plant chemicals with anti-parasite activity, suggesting that they can self-medicate. This foraging behavior increased the reproductive success of flowers producing the highest nectar concentrations of these chemicals, showing that evolution of floral reward chemistry could be influenced by pollinator-parasite interactions. This research appears in the Proceedings of the Royal Society B: Biological Sciences and Ecology, and was featured in articles in Nature, Scientific American, ﻿﻿Times of London﻿﻿ and Vice.
​ 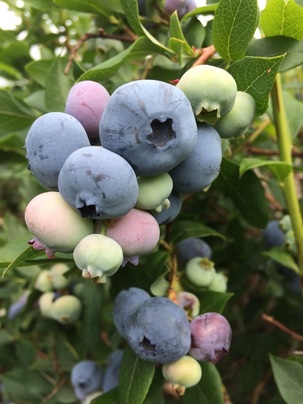 Like their wild relatives, agricultural crop plants interact with many other organisms. We know that such interactions can strongly influence crop yield, for example, when wild bees forage at farms, delivering the ecosystem service of pollination. What is less certain is how multiple simultaneous interactions could affect performance of agricultural crops: could suites of mutualists have synergistic effects in agricultural systems? This question is of basic interest to ecologists, but it also has important applied value, because agriculture must meet increasing demand for food with a limited land base, where conventional practices often have negative consequences for surrounding ecosystems.

In post-doctoral research with Drs. Taylor Ricketts and Alison Brody at the University of Vermont, I investigated how a class of belowground symbionts, ericoid mycorrhizal fungi, might influence aboveground interactions between a crop plant, blueberry, and its pollinators. In this work we asked whether inoculation with these beneficial fungi affected expression of floral traits important to attraction of wild bee pollinators, including flower size, pollen production, and nectar chemistry. We have shown that association with mycorrhizal fungi can result in strong changes in floral traits and bee pollinator behavior, resulting in plant reproduction. We conclude that blueberry growers could increase crop yield and environmental sustainability of their farms by managing belowground microbial mutualist communities, just as they currently manage soil fertility, fungal diseases, and pollinator availability. This work was funded by a postdoctoral research fellowship from the USDA National Institute of Food and Agriculture.

Decline and Conservation of Bumble Bees 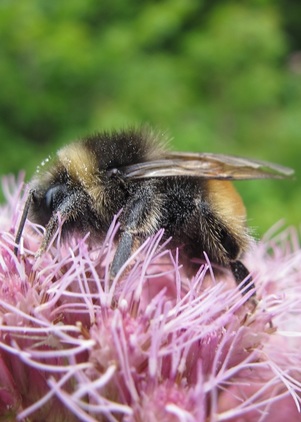 There are more than 20,000 species of bees worldwide, and many perform key ecological roles as pollinators of wild and cultivated plants. I study the distributions and conservation status of North American bumble bee species, many of which have declined greatly in the last 20 years. In a 2018 Journal of Insect Conservation paper, I report that nearly half of Vermont's native bumble bee species have declined or disappeared, and that some of these losses are associated with land use changes in the state. With co-authors I report in a 2015 publication that climate change is shrinking the home ranges of many bumble bees across North American and Europe, contributing to rarity of species like Bombus terricola (right). This research was published in Science, and featured in Nature, The New York Times, and the Washington Post, among other media outlets.

Bumble bee declines are also driven by a variety of other threats, including pesticides, habitat loss, and parasites, and assessments of their changing distributions are needed by policymakers. I contribute data to and produce assessments of North American bumble bee species conservation status for the International Union for the Conservation of Nature (IUCN), Committee on the status of Endangered Wildlife in Canada (COSEWIC), and state/ provincial and national efforts to secure legal protections for endangered bee species. I participate in citizen science efforts to track current distributions of bumble bee species, including the Xerces Society for Invertebrate Conservation's Bumblebeewatch.org, and surveys by the Vermont Center for Ecostudies and the state of Maine.

To aid in identification of bumble bees by scientists and the general public, with co-authors I wrote the book Bumble Bees of North America: An Identification Guide.